Your way to Hamburg/City Center

Rent rooms for your own event >>

Travelling to Hamburg by Car
How to get to the Training Center Hamburg/City Center with the route planner.

From the North via Motorway A7/A23
Travelling on the A7, take exit Stellingen and drive straight along Kieler Straße in the direction of Hamburg/Messe/Zentrum for approximately 3 km. As soon as you can see the ABB building, move to the left lane heading for Eimsbüttel and turn into Fruchtallee. Proceed in the direction of Hamburg Messe/Zentrum straight along Schäferskampsallee, Schröderstiftstraße, Edmund-Siemers-Allee, which follow one another. Pass by the Dammtor railway station (to the right) and turn right before reaching the river Alster, go on under the railway bridge, and turn right into the Esplanade.

From the South or Southeast via Motorway A1/A7
Follow the traffic signs “Hamburg-Centrum”. While driving on the A255, you will pass several bridges over the river Elbe. Afterwards, move to the left lane and turn into Amsinckstraße heading in the direction of “Centrum”. After the ADAC building, move to the right lane. At the next traffic lights (next to the Deichtorhallen) go along the middle lane which turns right and continue through the tunnel heading towards “Messe”. The Lombardsbrücke takes you over the river Alster and directly into the Esplanade.

From the Northeast via Motorway A1 or from the East via Motorway A24
At the motorway junction “Kreuz Hamburg-Ost”, take the A24 in the direction of Jenfeld, but make sure NOT to leave the A24 at exit Jenfeld, but to carry on along A24 until you reach the end of the motorway at the “Horner Kreisel” roundabout. In the roundabout, take the Sievekingsalle heading for Hamburg Centrum. Pass by the multi-story buildings of IBM (colorful windows) and Siemens and drive along the Adenauerallee until reaching the central station (Hauptbahnhof). Turn right at the central station. The Lombardsbrücke takes you over the river Alster and directly into the Esplande.

Parking: We recommend the Gänsemarkt car park, which is only 5 minutes walking from the Training Center.

Travelling to Hamburg by Train

A very convenient route is to go by the train (e.g. ICE) directly to the Dammtor railway station. Take the exit CCH/Planten un Bloomen and turn left. Take the first pedestrian bridge, turn left, then take the second pedestrian bridge and turn right after crossing this bridge. Cross the Esplanade at the traffic lights and turn left into Esplanade. It is a 6-minute walk.

Alternatively, you can take the route over Hamburg-Hauptbahnhof (central railway station): Leave the central station in the direction of Glockengießerwall, city center. The bus stop is directly next to the exit. From there, you can take bus number 112 heading for Altona/Neumühlen/Övelgönne and get off at Stephansplatz. Alternatively, you can take the subway (U-Bahn): U1 (blue route) heading for Ohlsdorf/Ochsenzoll/Garstedt/Norderstedt will take you to station Stephansplatz (approx. 15 minutes, exit Esplanade). Our Training Center is only 300 m from there.

You can find further public transport connections under www.hvv.de.

Travelling to Hamburg by Plane

Travelling by taxi from the airport, you will reach the Training Center Hamburg in 20-35 minutes at a cost of approx. € 25.00. Alternatively, you can take the suburban train Line S1 to the underground and suburban railway station Ohlsdorf (approx. 3 min.). The subway U1 (blue route) heading for Jungfernstieg/Hauptbahnhof will take you to station Stephansplatz in approx. 15 minutes (there, take the exit Esplanade). The Training Center Hamburg is located approx. 300m from there.

Distances to the Training Center:
• 20 min from the airport (car) / 30 min. by public transport (bus line 110 or suburban train S1 to Ohlsdorf, subway U1 to Stephansplatz) 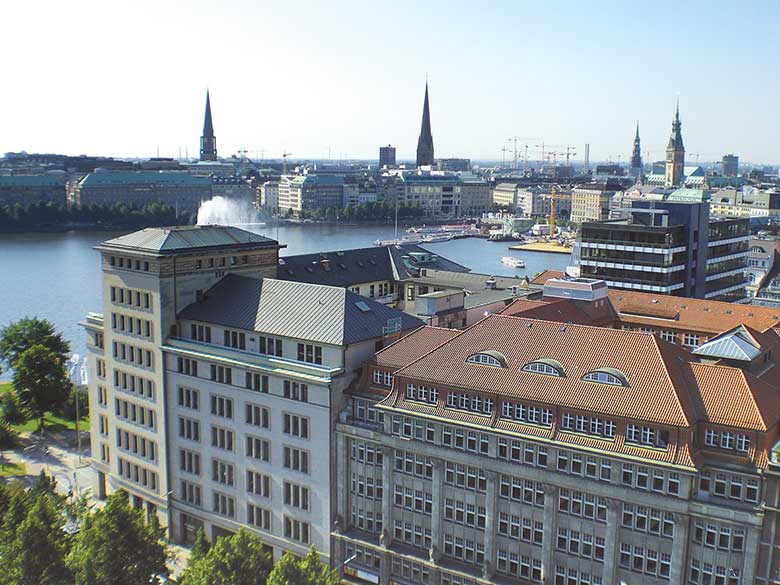 Distance to the Training Center: just a few steps

Price: Single room starting with EUR 101 per night, breakfast EUR 15. The price includes a 3-day-ticket for the public transport in Hamburg.

Price: Single rooms starting with EUR 85 per night including breakfast
When making your reservation at the Hotel Alster-Hof, ask for the ExperTeach rate.

Motel One Hamburg am Michel

Price: Single rooms starting with EUR 81 per night plus EUR 11,50 for breakfast.

Price: Single rooms starting with EUR 95 per night plus EUR 10 for breakfast

We will be pleased to reserve your hotel room for you. If you want to make use of this service, please call us under the central service phone number +49 6074 4868-0. 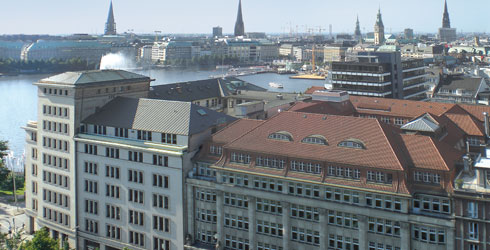 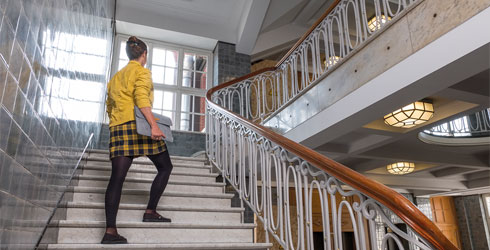 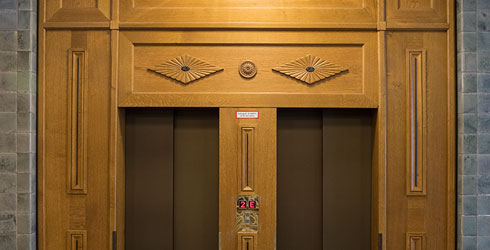 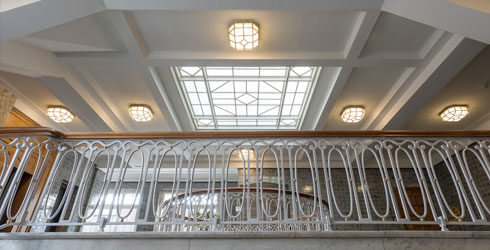 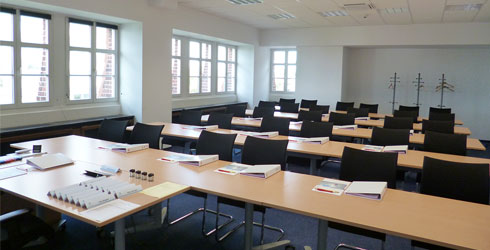 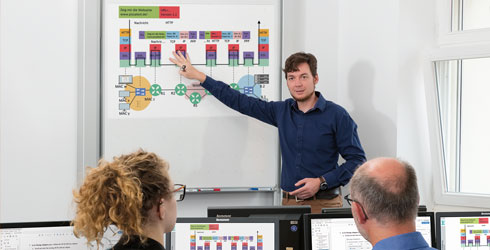 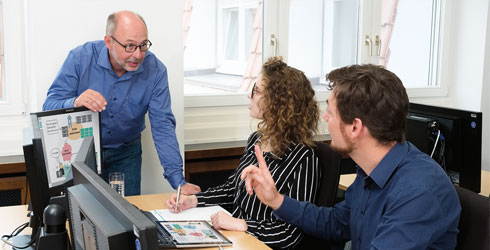 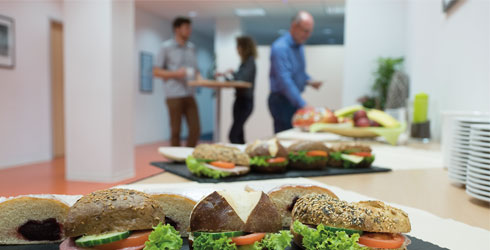 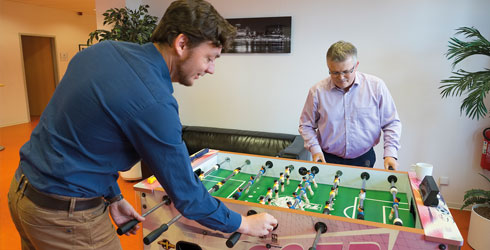 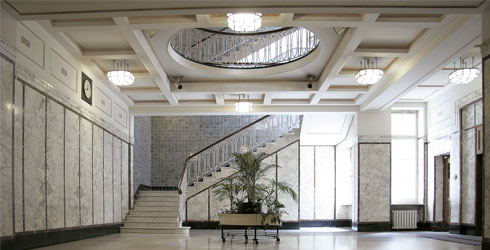 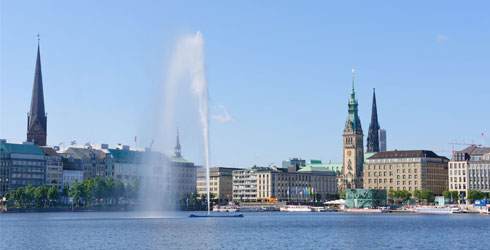 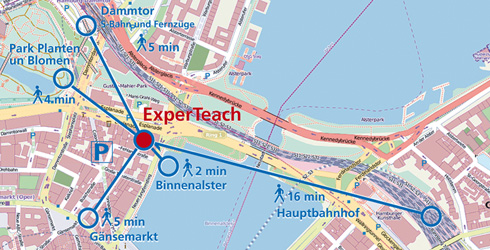 The Training Center Hamburg/City Center is located in a historical office building at Esplanade 6. With five ample, air-conditioned training rooms in an ambience between Art Deco and Art Noveau Style, we offer you a unique training atmosphere in Hamburg.

We offer you an excellent location with restaurants, cafés, and bars in the immediate vicinity. Museums, theaters, and operas are all only a few minutes away, while the nearby Dammtorbahnhof railway station provides excellent traffic connections. Numerous hotels, shopping malls, the famous Gänsemarkt (Goose Market), and the scenic Planten un Blomen Park can conveniently be reached on foot.

You can look forward to:

Rent rooms for your own events >>

To give you an overview of the abundant leisure time activities offered in Hamburg, we have made the following pre-selection:

Arts, Culture, & Nature:
• Walks and concerts just around the corner in the park Planten un Blomen
• Arts & culture in the Stadtpark (municipal park)
• Excursions on the Alster river, in the harbor or through the city of Hamburg
• Musicals, Theaters, Concerts & Cabaret
• The Fish Market

Miscellaneous:
• Getting the creeps in the Hamburg Dungeons
• The world of model railways in the Miniaturwunderland
• Annual Fair Hamburger Dom
• Watch films in the Cinemaxx cinema at the Dammtor just around the corner
• FitnessFirst (Europapassage/Ballindamm): The day ticket for 25 € includes the complete training offerings and all other services.
• FitnessFirst (Hamburg-Stephansplatz)

For more information for you stay in Hamburg, see www.hamburg.de or www.hamburg-tourism.de.